Scott High School Homecoming Parade Traffic Information: The Taylor Mill Police Department will be implementing temporary traffic regulations to ease traffic congestion for the Scott High School Homecoming Parade today, September 16th. NO On-Street Parking will be permitted on Mill Valley Drive between the hours of 1:00 p.m. and 7:00 p.m. Any vehicle not moved will be towed at the owner’s expense. Mill Valley Drive will become a ONE WAY STREET moving in an easterly direction from Stone Hill Drive to Taylor Mill Road between the hours of 5:00 p.m. and 6:15 p.m. Vehicles will ONLY be permitted to enter Mill Valley Drive from Stone Hill Drive. NO VEHICLES will be permitted to enter Mill Valley Drive from Taylor Mill Road after 5:00 p.m. Residents are encouraged to use Sunset Drive or Old Taylor Mill Road to access Stone Hill Drive. Police Officers will be on hand to assist residents in getting to their homes safely during this event. Taylor Mill Road South Bound will be closed at 6:00 p.m. and will reopen immediately after the parade.  Pride Parkway will remain open to thru traffic until the parade reaches the southern end of the Taylor Mill Road/Pride Parkway intersection, then Pride Parkway will be closed between Taylor Mill Road/Wayman Branch Road and Scott High School until after the parade. The Taylor Mill Police Department apologizes for any inconvenience this may cause. Thank You for your cooperation in making this event safe for everyone. 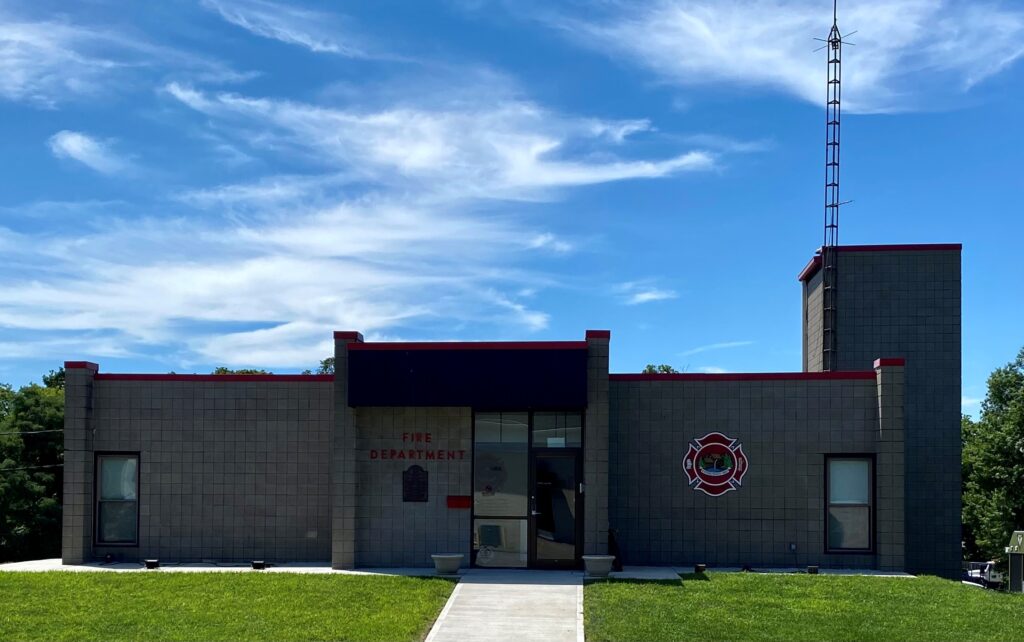 In the fall/winter of 2020/2021 the city was addressing water coming into the basement of the firehouse.  Whenever it would rain, water would infiltrate the northwest side of the building and run down the walls in the hallway, maintenance closet and bathrooms.  We tasked the city engineer to locate the cause and propose a fix.  During this initial review by a structural engineer, other issues were discovered.

The east wall was bowing out as if warping.  The lintels of the windows were also rusted and warped, indicating possible sinking of the foundation.  During this period, we also experienced a severe rain that caused enough water to wick into the masonry of the east side that the drywall on the second floor warped and molded.

The city commission decided to take a more aggressive approach to tackle these various issues and address them all at once. A structural engineer was engaged to perform a review.  The engineer’s reports dated January 2021 (Attachments A and B) detail what was found and their recommendations.

The report initially made 20 recommendations. The estimate at that time was $730,600. Initially, the commission voted to address 12 of the report’s recommendations.  However, by this time COVID was beginning to affect prices and supply chains of many construction items.  While the commission wanted to address as many of these issues as they could, as the cost increased and the realization that they were spending considerable funds and not solving all the issues, some commissioners decided to also look at the possibility of building a new firehouse.

The plans that are attached are not final nor are they what we expect to build.  They are simply drafts to help estimate the cost of such a project.  If the commission decides to move forward with either of these options, finalized plans and cost estimates will be further developed.  Using these reports, we can estimate the cost of the debt the city would incur. The city would use a combination of debt service (loans) and existing cash reserves.

The public is invited to come to one of two open houses at the firehouse to view the facility in person.  The first open house will be held on Tuesday, August 30, from 4 p.m. to 8 p.m.  The second open house will be on Saturday, September 3, from noon to 3 p.m.

We ask you review these documents, come to one of the open houses at the firehouse so that you can personally review the issues firsthand.  And lastly, we invite you to come to the public hearing on Wednesday, September 7th at 6 p.m. at the Pride Park Community Center and let the commission know your opinion on the project.  Everyone who wishes to voice their opinion will be given three minutes to speak. The commission will simply be present to hear your input that night and will not rebut details or debate.

The commission will then take your input and discuss their thoughts and leanings at the caucus meeting on September 28th at 10 a.m.

Copies of the referenced attachments may be picked up at city hall M-F 8-5.