The Taylor Mill Fire/EMS Department protects the lives and property of citizens who live and work in the community.

We provide the following services:

We employ a mix of more than 60 full-time, parttime and volunteer firefighters, firefighter medics and firefighters EMTs and make an average of 1,000 to 1,200 runs each year. About 65% of our runs are Rescue or EMS related. Structural fires account for about 8% of our calls.

To view the list of public services and educational opportunities offered to the community by the fire department, please visit the Public Services & Education page.

John Stager has served as the Taylor Mill Fire Department’s Fire Chief since 2014. He provides leadership to 8 career, 12 part time, and 20 volunteer personnel.

Prior to becoming Chief, John was employed as a Full-Time Firefighter for Taylor Mill in 2010 and was promoted to the rank of Lieutenant in charge of training in 2012. John came to Taylor Mill from Ohio where he worked as a Firefighter Paramedic for West Chester Township, Madeira/Indian Hill Joint Fire District, Union Township and Volunteered with the Greenhills Fire Department. Chief Stager has also been a Police Officer for the City of Covington, Kentucky as well as a Police officer for the City of Cincinnati.

Chief Stager has attended the University of Cincinnati and Cincinnati State Technical College. He studied under the Associate of Applied Science Degree for Criminal Justice and the Paramedic Science Major Program. He was an Active member of the Army Reserve “Green to Gold” program through the University Cincinnati for four years and also a Corpsman in the Navy Reserve for two years.

He is married to Jennifer and has three children: Cole, Connor, and Clare. When not working Chief Stager enjoys participating in 5 and 10ks with his wife Jennifer and coaching his kid’s sports teams.

In Honor of Past Members

In Case of Emergency (ICE) 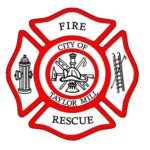