Special Commission Meeting: Special Commission Meeting is scheduled for Wednesday, June 10th at 7pm at the city building.  Members of the public will not be permitted to attend the meeting in-person, but are encouraged to view the meeting on the TBNK.org website.  Questions or concerns for the upcoming meeting can be submitted to the City Administrative Officer to present to the commission. Contact can be made by going to city's website or by calling 859-581-3234. 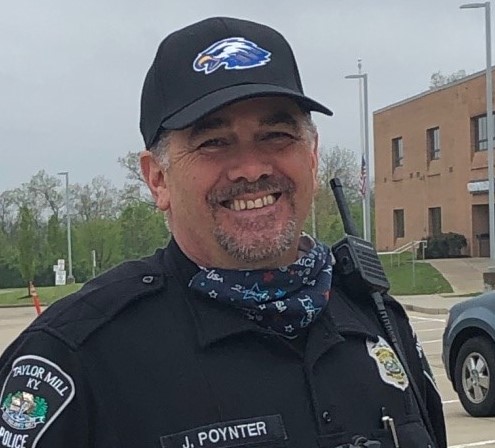 The Taylor Mill Police Department and the Kenton County Board of Education are proud to announce that SRO James “Jimmie” Poynter has been named the Kentucky School Resource Officer of the year for 2020 by the Kentucky Association of School Resources Officers. SRO Poynter was nominated by longtime Scott High School faculty member Dan Wooley.  Scott High School Principal Dr. Brennon Sapp noted, “I have worked with SRO Poynter for four years now.  Since his first day on the job, Scott High School has been a safer school as a result of the individual collaborative efforts of Officer Poynter.” Moreover, Chief Knauf stated, “During my tenure, I have come across no finer school resource officer than SRO Poynter.  His professionalism and dedication to school safety are unmatched.” SRO Poynter has almost a quarter century of law enforcement service in Northern Kentucky.  In addition to his school resource officer duties, Officer

Poynter leads many community programs such as Cops and Kids, Special Olympics and the COPS Fallen Officers Fund.  Also, SRO Poynter is the current vice president of the Kentucky Association of School Resource Officers.  SRO Poynter received more than a dozen letters of support from school faculty members supporting his candidacy for SRO of the year.  Some quotes from the many letters of support include; “What a fantastic SRO we have at Scott”, “James Poynter is a blessing to our school”, “He goes beyond his duties each day, even surprising staff with donuts here and there”, and “Poynter has created a relationship with students and faculty that makes him a part of our family!” SRO Poynter will officially be presented with his award this July, at the state SRO convention in Louisville, KY.